Burgess Corporation was formed through the consolidation of several construction entities.

Charles Funderburk, began welding with his father, Leroy, in 1963, at the age of 16.  Leroy, who had welded major projects, including the stainless steel welding on the St. Louis Arch, was a member of the Pine Bluff, Arkansas Local 665 Union.  Charles joined the Local 665 before finishing high school, and upon graduation, left immediately to weld at the International Paper Plant in Monroe, Louisiana.  Soon after, Charles began his first power plant construction in Malvern, Arkansas at the Lake Catherine Plant.

Following the completion of that plant, Charles, at age 20, went to Russellville, Arkansas and began welding at Arkansas Nuclear One.  It was here, that he began code welding Stainless, Inconel, and Hastelloy.

Charles followed union work, qualifying and performing on major power plant construction projects during the 1970s and 80s, welding from California to the Carolinas.  On a signature project, a crack repair in Cedar Rapids, Iowa, he was selected from more than 2000 welders tested, to perform repairs on cracked nuclear reactor piping.  In 1983, Charles took his first non-union job, welding for an oil services company in Prudhoe Bay, Alaska.

Following his return from Prudhoe Bay in 1985, Charles founded Motion Welding Service.  Over the next 15 years, Charles contracted welding and piping services for over 30 of the largest contractors in the country, until merging with Burgess in 1999.

The construction lineage continues with Charles’ sons, Charles Ed, a high-end custom builder in Little Rock, Arkansas; and Scott, a North Slope based project manager, on the Alaska pipeline. 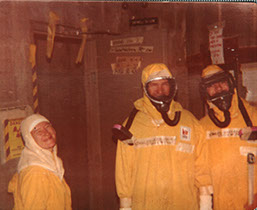 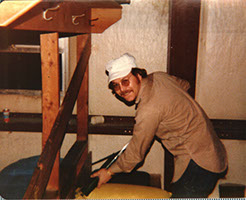 Our predecessor company was formed by Albert “Buddy” Layton Lee, June, 29th 1974, when Mr. Lee was initially licensed as a mechanical contractor by the State of North Carolina.  That license number 6595, remains the mechanical license for Burgess Corporation to this day.  Mr. Lee continuously operated the firm for 30 years.

Albert’s first construction experience came at an early age, milling lumber in a depression era saw mill along with his father and uncles.  As was typical during that era, they would often take other jobs during slow times.  One such job was the excavation of the Atlantic Intracoastal Waterway, from Lockwood Folly River Inlet in North Carolina to Little River, South Carolina.

After serving in the Pacific theater during World War II, Albert worked many jobs expanding his skills.  He possessed exceptional mechanical and piping knowledge.  A few years later in 1954 Mr. Lee went to work for his Uncle Mr. J.T. Lee, of Wilmington, North Carolina.  Mr. Lee was moved to Clinton, North Carolina in 1956 to manage the Clinton operations of J.T. Lee and Sons.  There he managed operations of a gas company until in 1974, he began a mechanical contracting company.  Well known as a knowledgeable piping contractor, many knew Mr. Lee just as, “the Gas Man”. 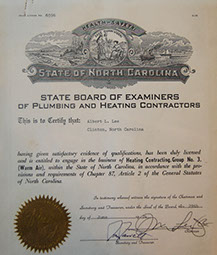 Vince Burgess spent most of his youth working for, and with, his grandfather.  Contracting was always his passion.  Following graduation from college, he worked for some of the America’s largest contractors.  Vince received his first contracting license, a State of North Carolina Mechanical License in 1993, once again, following his grandfather’s path.

Vince, drawing on the wisdom and guidance of Lee and Funderburk, guided the Burgess Corporation, developing an infrastructure and building contracting business that has successfully completed major commercial and industrial projects throughout the United States, including Hawaii and Puerto Rico.  The company has earned an excellent reputation, working for multiple government agencies, large companies, and many of the largest contracting firms in the world. 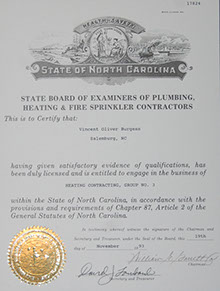 Burgess Corporation was built on the foundation of solid environmental stewardship, recognizing our responsibility to actively contribute to positive efforts that preserve and maintain our environment.  Our goal is to ...

Our predecessor company was formed by Albert “Buddy” Layton Lee, June, 29th 1974, when Mr. Lee was initially licensed as a mechanical contractor by the State of North Carolina.  That license number 6595, remains the mechanical license for ...

We believe that safety is the essential ingredient to planning and executing a successful project. Burgess Corporation is known for its safety record, which is built on a strong safety culture including procedures...

It is our mission to abide by a standard of excellence that represents our commitment to quality and timely delivery of projects, while maintaining our duty to operate under the covenant of good faith and fair dealing.